Leroy Ellington’s Sacred Hearts released their Sanctified CD in February 2019 and it has enjoyed worldwide success, including:

New CD "Live and Kickin It!" The first time I felt the raw power of this combination of players, I knew I wanted to capture it live! There’s a “gritty, yet polished explosiveness” that happens when it’s right, and when it’s right, it’s a FORCE OF NATURE.

I’m proud of this live project, yes, it’s live, it comes with all the hiccups that happened on those 2 nights! I’d like to think this CD represents the way we should live our lives… jump right in there, make your mistakes, give it everything you have and NEVER GIVE UP! There are NO OVERDUBS at all on this album…what you hear is what we played…I can live with that!

Stay tuned… “Live & Kickin’ It” will be officially released SUMMER 2021.

Purchase a physical CD by sending $20 via PayPal using the button below: 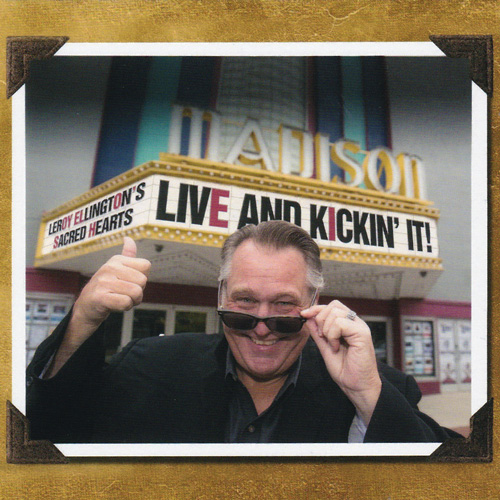 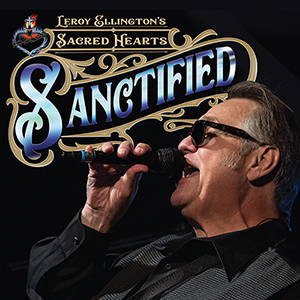 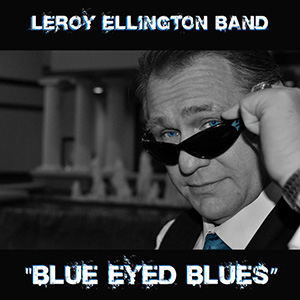 In the last 30 years, Leroy has established himself as one of the region’s most proficient and soulful vocalists. A “MASTER SHOWMAN” with the “on stage” confidence to please ANY CROWD!

Leroy started his career in the 80’s, playing with “Ritchie & The Students”, led by “Richard Johnson” founding member of “The Students”, a 50’s Doo-Wop group with a few hit singles in the late fifties, their big hit was “I’m So Young”, which was covered by “The Beach Boys” and was also in the soundtrack of the movie “Cry Baby”.

During those years Leroy had the pleasure of sharing the stage with a number of national acts including: The Platters, The Chi-Lites, Lou Christie, and Little Anthony, Sam Moore , The Coasters, Danny & The Juniors, Dion and many many more!

In the 90’s, Leroy joined Stacy Mitchhart in his band, Stacy & Blues-U-Can Use, on sax and backing vocals, during that time Stacy released the CD, “Blues Transfusion”. Leroy is faetured on saxophone and co-wrote a few of the songs. During those years Leroy had the pleasure of sharing the stage with a number of national acts including:Lonnie Mack, Bobby Blue Bland, Jr. Wells, Clarence Carter, Lonnie Brooks, Buddy Guy, Koko Taylor, and many more.

In 1994 Leroy started his own band, Leroy Ellington & The E-Funk Band, this band was a staple on the Cincinnati music scene for over 20 years, performing Night Clubs, Casino’s, Corporate Events of all types, and nearly every high profile event the area has to offer. Includinga 20 year run as the Monday Night Headliner at THE TASTE OF CINCINNATI. During those years Leroy had the pleasure of sharing the stage with a number of national acts including:  Mitch Ryder & The Detroit Wheels,Tower of Power, The Commodores, Glen Campbell, War, and more!

Around 2010 Leroy realized that he really missed playing “blues”, and that it seemed like the place he felt most comfortable musically,

The Leroy Ellington Band has been one of the most popular blues bands in the region since 2012,ﾠIn 2016 our EP, “Blue Eyed Blues” was named “Best Self Produced CD by The Cincinnati Blues Society in 2016.

In January of 2017, “Blue Eyed Blues” was judged by industry experts in Memphis TN. at The International Blues Challenge in Memphis and was a semi finalist.

In May of 2015, Leroy was featured as a guest vocalist with THE KENTUCKY SYMPHONY ORCHESTRA, as they paid tribute to the music of Chicago & Blood, Sweat & Tears. Leroy’s role was to bring to life the soulful sound of  legendary singer David Clatyon Thomas, lead singer of “Blood Sweat & Tears. His performance was powerful and soulful, and in a local review, the writer wrote: “It’s uncanny how much Leroy sounded like David Clayton Thomas!”(View amateur footage of performance)

In early 2018 Leroy started his latest recording project with a select group of Cincinnati’s best muscians, the CD entitled “SANCTIFIED” will be released in February 2019. Stay tuned! Mike Grosser has been playing bass guitar for over 50 years, during that time he has traveled and performed in all 50 states, as well as internationally.

During those years Mike had the pleasure of sharing the stage with such greats as: Stevie Wonder, Grand Funk Railroad, Little Feat, John Denver, Tower of Power, Cold Blood, Poppa Chubby, and more.

Mike has also spent time as an actual member of such legendary bands as: WAR and Delbert McClinton.

After years on the road, Mike returned home to the Cincinnati/Northern Kentucky area, where he went right back to work playing music with The Lusters, being admitted to the NKY Music Legends Hall of Fame in 2018.

During that time, Mike shared the stage with national acts such as: Georgia Satellites, Bachman/Turner Overdrive, Bellamy Brothers – many more.

Leroy Ellington Band – A member of Leroy Ellington Band since 2013, Mike provides the “THUNDER” that makes the band so powerful. During that time Mike has co-written and co-produced Leroy’s debut EP, “Blue Eyed Blues”. Which was the winner of the 2016 “Self Produced” as named by The Cincinnati Blues Society. Opened for Delbert McClinton and others!

Leroy Ellington Sacred Hearts – In 2017, Leroy decided to head back to the studio with a group of select players from the Cincinnati region. This time to complete a full length CD, that will be released in February 2019. Mike has co-written many of the songs on this album. The first music that Marcos heard was the classical music played by his mother and the Latin recordings played by his Argentine father.

His earliest influence to popular music was his older brother of 11 years Michael.  Michael, an accomplished drummer would let young Marcos sit on his lap as he played along to the recordings of Ray Charles, James Brown, Lonnie Mack, and other Blues, Soul, and R&B artists from the late 50’s early 60’s.

Later he heard the music of The Beatles and started to take interest in the guitar, when he heard Jimi Hendrix… that’s when he started serious.

After extensive touring early in his career, Marcos returned to his home town of Cincinnati, Ohio to concentrate on recording, writing, and producing his own music. He founded the band The Bluebirds.

Marcos considers his most notable effort the formation of the group The Bluebirds. Over their 23 year career they have 11 releases, the group is getting ready to release their latest recording, and they continue to play live weekly, and have more projects in the works.

Marcos hopes to release his first solo project in 2019!

When asked why after such a long career he decided to do a solo project Marcos said “This is a departure for me, the dynamic of all the members working together to finish a CD project without killing each other is a lot of fun, and the dynamic of multiple writers on a project helping each other get our tunes in shape, or helping to create parts on other peoples songs is a process that is very fullfilling. That being said, I’m finding that doing all of the work myself provides a different kind of fulfillment, it really challenges me to be objective, and perhaps more creative.”

It recently came to my attention that you are on the Greg Chaquico record.  How did come to work with Greg who is a multi platinum grammy nominated guitar player from the band Jefferson Starship?

“My good friend Noah Hunt was going to sing on Greg’s record, I was contacted to record him in my studio. We got the basic tracks finished but they were very basic. In order to give Noah more of a “song form” to work with I added some guitar parts, and some solo bits…When Greg got the files, he liked what he heard, so he kept those parts on the final release.” Originally from Oklahoma, Max Gise has made his home in Cincinnati since 2004.

After completing his Masters in Jazz Studies in 2006, Max has stayed busy as a jazz guitarist and educator. Mr. Gise is an adjunct professor of Jazz Studies at North Kentucky University since 2012. Prior to NKU, he worked as an adjunct music professor at University of Cincinnati at the College Conservatory of Music from 2006-2012. He has been an instructor at the summer Jazz camp at CCM since 2008 and worked as a clinician at several tristate area High Schools (Walnut HiIls, Lakota West & East, Butler Tech, Taylor, Turpin, Loveland). Additionally, Max maintains a full guitar lesson studio at the Cincinnati Music Academy in Silverton, Ohio.

Max has been recorded several times and he has worked with several well-known Cincinnati jazz artists (John Von Ohlen, Steve Schmidt, Pat Kelly, John Zappa, Brian Hogg, and many others) and some international jazz artists like Ignacio Berroa, Rufus Reid, Ray Vega, Freddie Bryant, and Kenny Werner. Max has also performed with the Kentucky Symphony Orchestra and the Montgomery-Blue Ash Orchestra. Additionally, Max plays with the Leroy Ellington Band, Just Strange Brothers, the Devou Daddies, and the Jack Garrett Band. He is also the assistant music director at Christ Church UCC in Fort Thomas, Kentucky since 2009. Shawn Elsbernd is a self-taught, working drummer and instructor. For six years he toured with the Ringling Bros. and Barnum and Bailey circus, playing over 400 shows every year. Since then he’s been grabbing every opportunity he can in every genre of music.

A modest musician, Shawn considers his career to have been by accident. “I lucked into performing. When I started playing the drums, I just called everyone I knew with an instrument to come play with me,” he explains.

Shawn also enjoys photography. But, he’s not very good at it.